Abbreviated History of the Belgian Malinois

No Copyright Is Claimed. Materials herein were pulled from the Web
For Educational Purposes Only. JSK9 and Mystique Malinois Websites Were Perused. Thank you.

On September 29, 1891, the Club du Chien de Berger Beige (Belgian Shepherd Dog Club) was founded. That same year, on November 15, veterinarian Prof. Dr. Adolphe Reul assembled a group of individuals from the various Belgian counties at a veterinary faculty in Cureghem in order to determine whether a national shepherd-dog type actually existed. The expert panel reviewed 117 canine representatives and determined that there was indeed a consistent type of a Belgian shepherd breed. Forty dogs were selected from this group, all of which were anatomically alike, though their coats varied greatly in length, texture and color.

The varieties of the Belgian shepherds were named, more or less, for the towns in which they originated. The Malinois was named after the city of Malines (the French name for Mechelen ). The Tervuren came from the town of Tervuren where the dogs were originally bred by M.F. Corbeel. The Groenendael was named after the village where Nicholas Rose bred the black Belgians. The Laekenois, bred around Antwerp and Boom, was named not after its hometown but after the royal park of Laeken where the dogs worked for shepherd Adrien Janssens.

In 1891 in the Belgian city of Malines, south of Antwerp, a group of dedicated breeders lived, gathered and promoted the Malinois. By 1901 the first Belgian Shepherd, Vos des Polders, was registered with the Societe Royale Saint-Hubert. 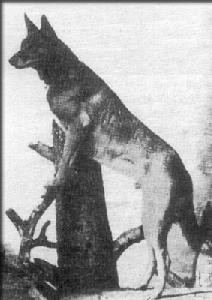 Vos sired Dewet, who was considered a cornerstone of the early Malinois. The Belgian shepherds owe their foundation to Vos, who was a rough-haired fawn dog coming from a line of shepherd dogs that were used to guard the Belgian flax fields. Vos was bred to a bitch, Lise de Laeken, and eventually bred to his daughters, which produced a line of gray and fawn with rough and short-haired coats that were consistent in type. These are the breedings that formed the basis for the Belgian shepherd breeds.

Salmo, a short-haired, brown/brindle Belgian Shepherd who is considered as one of the founders of the Malinois variety was born in 1882. He sired the famous Malinois Tomy in the late 1890s. Tomy was the most famous of the early Malinois, known for his outstanding colour and build. He was an excellent worker as well as a winner at the dog shows. He was the first short-haired shepherd with a charcoal fawn coat and a black mask. 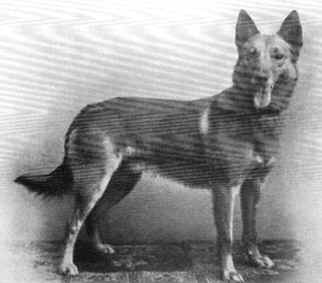 Tomy was bred to Cora I, who was a short-haired brindle with a mask, and this mating produced Tjop, a short-haired fawn without a mask. Tjop is considered a pillar of the breed, and his name can be found in the background of the important bloodlines of the short-haired shepherds (Malinois). Tjop and Dewet, although both very different in type, formed the pillars of the Malinois breed. Dewet, a powerful and coarse dog, had light fawn colouring with an overlay of black patches. Tjop is considered to be the prototype of the Belgian Malinois.

Early breeders recognized the beauty and elegance of the Malinois but never sacrificed beauty or type for working ability. Historically, the Malinois was known as the working dog and to this day he continues to enjoy the reputation of being the most trainable, versatile and hard working of the four varieties. The Malinois was often used in the breeding of the other three varieties of Belgian shepherd to set coat type and colour and to strengthen herding instincts and working abilities. Over the years there had been much crossbreeding between the four types of Belgians. Although often frowned upon, it was not until 1973 that the Belgian Kennel Club no longer allowed crossbreeding between the different varieties. 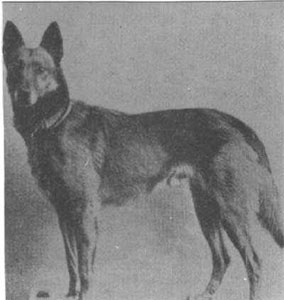 On May 8, 1892 the first Belgian specialty show was held in Cureghem, Belgium. Of the 92 dogs that were exhibited that day, about one-third of them were short-haired (Malinois), though the majority was long-haired. In the same year, the first standard for the breed was written, describing the three coat varieties: long, short and rough. This standard was reworked many times over the years to reach the definitive classification and description of the four varieties of the Belgian shepherd, divided by coat texture, coat colour and length of coat.

In 1898 a second club was formed by Dr. G. Geudens and L. Huyghebaert in Malines. This new club was in fact a branch of the club of Brussels. Heated disputes and conflicts hindered the breed in these early years, and experts could not agree on the correct or desired coat length and colours. There was also conflict regarding the utilitarian ability of a dog versus its conformational (or esthetic) value. In time Dr. Reul’s club disappeared, nd the Berger Beige Club remained I was recognized by the Societe Royale Saint-Hubert. Another club, the Royal Groenendael Club, was also recognized, and the two clubs functioned until March of 1990 when the Berger Beige Club and the Malines club were finally united.

In the late 1890s, because the Club du Chien Berger Belge held only herding trials, Louis Huyghebaert began holding dressage trials to test the Belgian dogs’ abilities with jumping over high fences and long obstacles and swimming. These trials were also combined with protection work and were called Belgian ring sport and Campagnes. The first trial, held in June of 1903, was won by Cora I, the dam of Tjop. Ring trials became a fixture in Belgian shepherd society, and national trials have been held on a yearly basis ever since.

Historically speaking, the Laekenois, the rough-coated breed, is closely related to the Malinois. Both were originally bred and predominantly found near Antwerp and Boom. Vos I, a main ancestor of the Malinois, is also responsible for the Laekenois. Vos was mated to Lieske, a short-haired brindle bitch, and this breeding produced Diane, the dam of Tomy. The same combination, however, also produced Tom de Vilvorde, one of the most famous rough-haired fawn dogs. Diane was bred by Adrien Janssens, whose sheep grazed in the royal park of Laeken. Janssens’s best dogs were rough-haired fawns, and these became the basis of the Laekenois breed.

The decade prior to World War I breeders worked together to solidify breed type and promoting the breed throughout Europe. Derived from Cora I, the mother of Tjop, and Dewet, the dogs at the De l’ Enclos kennel were superb working dogs and show dogs. Belgians were actively and successfully competing in the increasingly popular police dog trials as well as tracking trials. Although breed members were used in the war as messenger dogs, ambulance dogs and artillery cart dogs, World War I was devastating to the Malinois in its homeland. Following the war, Breeders were compelled to ignore colouration of the Malinois in an effort to broaden the breeding base and re-establish the quality lost.

In time the breed reemerged and began to thrive during the period after the war. Arthur Hanappes’s “de Jolimont” kennels led the way for many new Malinois breeders, breeding many great working dogs that were exceptionally beautiful. The ‘de l’Ecaillon’ kennels of Felix Verbanck, continuing the work of Prof. Reul, deserve special mention, as Mr. Verbanck earned a place in the history of the breed. He not only established a leading kennel of Malinois but also served as secretary of the parent club. He mentored many Malinois enthusiasts over his life in the breed. His kennel, established in 1930, was based on ‘de Jolimont’ stock. Other very important kennels were “de Hallattes” and “du Forgero” with the Champions Abello and Benny and “de Grand Rabot” with the Champions César and Ecapi.

History tragically repeating itself, World War II was no less devastating to the Malinois. Once again the breed was put into service as messenger dogs and Red Cross search dogs, and many brave Belgian dogs lost their lives to the German army in the line of duty. Because the dogs were so skilled at their jobs, the German army was ordered to shoot the dogs on sight, which led to a near extinction of the breed. Thankfully a few breeders in Europe were able to hide their dogs and the breed did survive. The most important kennels during this time were “van de Reep” and “van de Welkom”. Flap known as “Blackie van de Welkom” came from the latter kennel and he is the foundation for the French bloodlines. After World War II the kennels “Fraternité” with the Champions Tibi, Rex and Rachid, “van de Molenbeek” with the Champions Snap, Varak, Vabil, Sito, Gary, and Eros and “van de Oewa” with the Champions Carack, Cabil and Hab rose to prominence.

After the war M. Poix from the kennel “du Bois d’Emblise” had very good contacts in the Belgian Kennel Club and he was able to obtain the famous Flap for breeding. Flap known as ‘Blackie van de Welkom’ (L.O.B. 72382) was a very fast, spirited dog who took part in five ‘Grand Prix of Belgium’ trials from 1958 to 1962 and his best performance was second place with 313.8 points in 1959.

In 1965 and onwards a Belgian breeder Mr Léon Destailleur improved the Malinois in the dog sport environment. He lived on the Belgian-French border and bred under the kennel name “du Mouscronnais”. Genetic selection and an improved education led to dogs like Quacha du Mouscronnais being bred. Quacha won the French Championship in 1972 and took part in a total of 6 French Ring championships.

In the seventies that the kennel “de Ventadour” produced three working Champions with excellent confirmation, they were Tzar, Utha and Teddy. Also during this decade the kennel “de Turenfels” was very successful by producing champions Vico and Urgo, it also brought the bloodline of Rusky into French breeding.

Flap has had a very strong influence in France through his children Léopar, Léobaro and Nerk, Norban, Nesi and Nesina van de Grensstraat. Léopar’s daughter Orane de Ventadour was mated with the Nerk son Quacha du Mouscronnais and females from the resulting litter were the foundation for three very famous kennels; namely “de la Fontaine du Buis” with the Ring Champion “Utha de Ventadour”, “du Domaine Caméléon” with litter sister Ulla and the “de la Noaillerie” kennel with Uranie. Dogs from the Flap line were very fast and spirited, and very beautiful however they were often sensitive to the handler. Later the Flap bloodline was crossed with Sirol descendants and the resulting dogs were strong in character coupled with a full grip. An example of this was the 1981-1984 French Ring Champion Othar de la Noaillerie, he was a son of the famous Belgium import Xjelaba.

A small number of Malinois have played an important role in establishing the breed in Holland. The main Dutch bloodlines are built on Sirol and his brother Stoud through their descendants Cabil, Carrak, Criquette and Kiener. Cabil and Carrak in particular have been very important for today’s bloodlines through their descendants Narcilo, Nopi, Kastor van de Rita’s Home, Carlo van Kristalhof, Snap ‘Nopi’, Marco and brother Marko van de Veldmolen, Hab van de Oewa’s, Bicou and Joerie.

Another bloodline that help establish the breed in Holland was Snap van de Molenbeek through his grand-son X’Wim van het Meuleken. X’Wim was well-known for producing speed and sharpness while his son Rachid de la Fraternité is the maternal grand-sire to Cabil, Carrak and Criquette.